The club will be celebrating our 50th season in the SSCA/SMCA during season 2020/21.

In fact, the Riverton Cricket Club was formed at a meeting at the Riverton Hotel on 14 September 1971, therefore the club is looking to hold it’s anniversary function in September 2021 (we will have further information about this function shortly). END_OF_DOCUMENT_TOKEN_TO_BE_REPLACED

The Riverton Rostrata Cricket Club is seeking players of all abilities to come down for the upcoming cricket season.  We are a welcoming, family friendly club currently fielding five teams in the South Metropolitan Cricket Association.

Based at Riverton Reserve, we are aiming to field three 2 day sides (that play a mixture of 2 day and 1 day games) and two 1 day sides.  If we get enough numbers we can potentially get a third one day team.  Our grades go from 2nd grade right down to 1 Day G, so there is a team for all abilities.

If you want to give cricket a go this season, this is the club for you.  Preseason starts Sunday 16th of August at Prendwick Reserve, Willetton.  Please see our Facebook page for full details of our pre-season training.

The club is pleased to announce that wide brimmed hats embroidered with the clubs logo are now being distributed to financial players.

The club would like to acknowledge the support of the City of Canning, who provided the club with a grant to fund the purchase of the hats.  Like all clubs, we have the occasional ‘moment’ with the council, but we cannot fault the support they provide to community groups within the city via a diverse range of grant opportunities.

The damage the sun can do is well known, therefore the club is keen for all our players to have the gear they need to reduce exposure to the sun whilst playing cricket.

Thanks again to the City of Canning for their financial support.  We would also like to acknowledge the grants officers within the council who have always been so supportive and knowledgeable when progressing grant requests. 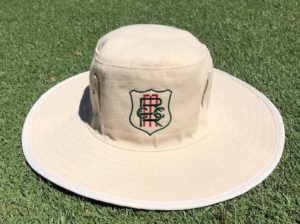 On Sunday, 25th November the club held the second edition of the Riverton Premier League, which also doubles as a fundraising day for charity.  This year, two teams played out a thrilling 20/20 cricket game which was decided with the second last ball of the day.

END_OF_DOCUMENT_TOKEN_TO_BE_REPLACED

The annual windup was held on Friday, 6th April 2018 at the Victoria Park Hotel.

Congratulations go out to Matthew Koenig who claimed the AF Newman Medal for best player in the First XI, as voted by the umpires.  Matt pipped Darren Marijanich in the last game of the season to claim his first AF Newman Medal.

END_OF_DOCUMENT_TOKEN_TO_BE_REPLACED

On Sunday, 25th February the club held a charity fundraising day involving three teams taking the field as part of the inaugural Riverton Premier League.  Each of the teams had a nominated charity – Beyond Blue, MS W.A. and the National Breast Cancer Foundation.

END_OF_DOCUMENT_TOKEN_TO_BE_REPLACED

Saturday, 19th November 2017 was a pretty special day for three of our players.  All of them scored their first 100’s for the club with two coming in the same innings. END_OF_DOCUMENT_TOKEN_TO_BE_REPLACED

The club has ordered a new training uniform which we hope will be available in early November.  This initiative was made possible through the support of the City of Canning who provided the club with a grant towards the cost of the uniform.

END_OF_DOCUMENT_TOKEN_TO_BE_REPLACED

The club is pleased to announce the appointment of Peter Marijanich as head coach for season 2017/18.

Peter has a wealth of experience having previously coached Carlisle Cricket Club with a considerable amount of success.

END_OF_DOCUMENT_TOKEN_TO_BE_REPLACED

The end of season windup was held on Friday 7th April at the Victoria Park Hotel.  A big thank you to all that attended – we hope that you enjoyed the night.  Some pictures from the night have been posted to the club’s Facebook page and congratulations go out to all trophy winners.   END_OF_DOCUMENT_TOKEN_TO_BE_REPLACED