The off season has seen quite a few changes as the committee strives to position the club as a strong performer in the South Metropolitan Cricket Association.  New website, new coaching structure, ongoing database completion, better use of email, introduction of SMS messaging for the season and new merchandise for both on and off field wear are all about presenting the club in a more professional manner.

As part of this virtual club makeover, the committee wanted to update the rat that has been occasionally used on merchandise since the club merger in 1994/95.

After doing some preliminary work to redraw our rat the club stumbled across a rat used by the Oak Flats Cricket Club in New South Wales.  We approached Oak Flats about the possibility of using their rat as the basis for our merchandise logo and they were gracious enough to grant us permission, subject to some adjustments to colours and overall presentation.

Below you will find our new rat which will make his debut on our shirts this season.  It must be stressed that the club shield will be retained on all club merchandise but it was felt that the rat adds a fun element to merchandise and it has to be said, it’s a ripping rat.

On behalf of the club we would like to thank Oak Flats Cricket Club for allowing us to use their rat. 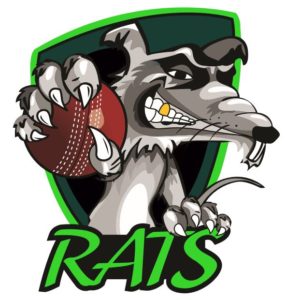